Are the pressing crowds of the everyday beaches in Ibiza threatening to spoil your chartered yacht experience? Do you like stumbling upon some new place, some hidden gem? Well, this list is tailor-made for you. Here are some secret places that allure with privacy and Ibiza flair. Purported to be one of the most remote beaches in Ibiza, Cala Llentrisca is sure to satiate the need to get away from the hustle on the main beaches in Ibiza. If you’re adventurous, this is the beach for you. The diminutive beach can be found in the south-west of Ibiza, near Cap Llentrisca. Don’t expect an easy time of it, though, as the beach has been largely left untouched aside from a few beach houses and tends to blend with the coast line.

This place has the longest beach on the island, but is still a bit of a hidden gem. On the beach itself there’s a resort that accommodates visitors with amenities like a bar and indoor plumbing. Here’s where it starts to differ from the main stay — head north from the beach and there are small coves and rock formations that just wait to be discovered by yacht charterers.

About 900 meters from the main island of Ibiza is a distinct private island, Isla Tagomago. There is a cove on the north side of the private island that is nearly as private as the island itself and is open to boats. Formentera is about a half-an-hour boat ride from the isle. The island itself is renowned not only for its private resort, but the native flora and fauna, as well as the unique rock faces and outcroppings.

The Salinas Beach may ring a bell if you’ve ever been to Ibiza. The beach is at the southernmost tip of the island of Ibiza, and is heavily frequented during the summer months. Beach vendors and even parades can be seen in the height of tourist season, each causing nearly as much stir as the hubbub of the crowd itself. But if you’ve got a chartered yacht, the coastline near the beach is waiting to be explored, and nearby you can find tiny satellite beaches that feel secluded. For a truly exotic and secluded adventure in Ibiza, cruise out to the uninhabited mountain island of Es Vedra. The island’s only residents are native goats, lizards, and an endangered colony of birds that are protected under conservation laws. Take a day and navigate around the island — you’ll enrich your experience doing so, and may even have tales to tell of the sights. Once the main harbor of Formentera before the La Savina port was constructed, this site is riddled with history and flavor. The northern coast of Es Calo is a recommended starting place for a tour of the isle, as the rocks just under the water are ready subjects for snorkeling when the light is right. The white sands of the surrounding beaches are as inviting as the water itself, and there’s no shortage of hidden beaches awaiting discovery. In the northern stretches of Formentera are unpopulated stretches of coast, such as the cove of Cala Saona. Once a popular spot, all that remains on the cove today is a collection of small boat houses battered by the elements over the years. Anchor nearby and explore the cliffs, the beach, and the horizon which in clear conditions provides a view as far away as the city of Denia on the mainland. 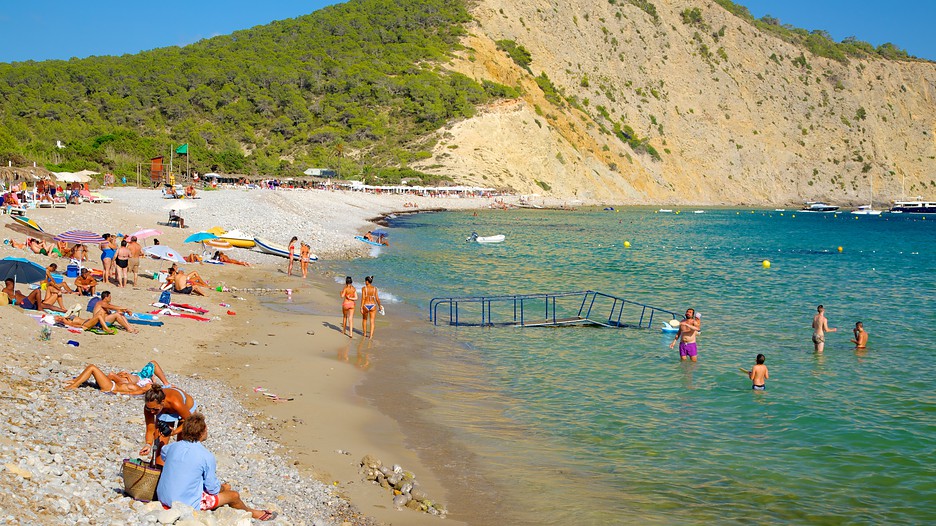 If you want a bit more population in your privacy, head over to Cala Jondal just 15 minutes away from the heart of Ibiza. Notable for its attraction of the stylish crowd, this beach holds restaurants and bars, some of which will even serve you directly on your yacht.

On the west coast of Ibiza, near Cala Conta, there is a small beach that offers incredible sunsets during the summer months. The beach itself is narrow and rocky, and there is a small bar that serves local favorites and snacks to satiate the palate.

This private island is a nearly untouched paradise that hides coves and beaches and even mud baths rich in sulphur. While the island itself is owned by a wealthy family in Barcelona, the pleasures of white sand and clear waters are open to all.

World Yacht Group is a global yacht consultancy that specializes in yacht charters, yacht sales and yacht management. We have offices in Los Angeles, Cannes, Ibiza and Madrid. If you are interested in chartering a yacht or any of our other services, please visit us at worldyachtgroup.com 7 Best Things to Do When Cruising the Bahamas

If you are interested in offering yourself the perfect vacation that brings you pure relaxation and incredible adventure, the best option is a luxury yacht

[December 2020] Opportunity To Save Millions On Buying A Yacht

If you are considering buying a yacht within the next months and want to save millions on the purchase, our CEO Joan Plana Palao is

Get the latest from World Yacht Group